Marvel’s mutant heroes return when a remarkable student rushes to save his family but ends up in a whole heap of trouble, in this Xavier’s Institute novel, First Team

We managed to grab a few moments with Robbie during lockdown to talk about his newest novel, First Team, which is out in March.

So, your first Marvel novel with Aconyte. On a scale of one to a million, how excited are you about this?

It’s tempting to say a million-and-one, right? Let’s just go with “it’s off the excitement scale.” Getting to write an X-Men novel isn’t something I thought would ever, ever happen. It wasn’t even on the radar of life goals, because I had never even considered the possibility. But here we are! It’s a privilege to get to tell stories with these iconic characters, and I hope I do them all justice.

Without spoilers can you tell us a bit about the story and the characters we’ll get to meet?

The story centers on a gang of Xavier’s Institute students, namely Anole, Graymalkin, and Cipher, as they team up to rescue Anole’s family from the threat of the Purifiers. Of course, Anole’s old buddy Rockslide gets dragged into the mix, as does the Institute’s principal, Cyclops. And then there’s the villain behind it all…

This is the second novel in Aconyte’s Xavier Institute series. What made you decide to write something in the X-Men series?

I’ve always wanted to write something for the X-Men, so there was no second-guessing on my part when I was offered the opportunity. The Xavier’s Institute line is still in its infancy, so getting involved almost from the start is also a  privilege. I’m certain there are more good things to come!

What made you choose to include The Purifiers for this Xavier’s Institute story?

The Purifiers are a fanatical religious cult whose primary aim is to wipe out mutantkind. In my story, they’re experiencing an upsurge in popularity under the leadership of Prophet Xodus, a Purifier big-shot who is never-the-less clearly taking orders from someone higher up. Just who that someone is remains to be seen. I’ve always thought of the Purifiers as very “classic” X-Men antagonists, so I really wanted to include them. They ticked all the boxes I needed for the book – they’re numerous, relentless, fanatical, and possess a mindset that is the dark antithesis of the peace, freedom, and acceptance Anole seeks and strives for.

For new-comers to the Marvel Universe who is Victor Borkowski, aka Anole, and what makes him special?

Victor Borkowski is one of the mutant students enrolled at the Xavier Institute. His powers revolve around reptilian mimicry (an anole is a type of iguana lizard). Among other things, he can scale walls and turn chameleon. He was one of the earliest openly gay X-Men characters of the modern era, and he also grew up with a loving, caring family, which isn’t something too many X-Men can boast of! His attachment to his parents means he’ll move heaven and earth to keep them safe, and it turns out he may just about have to.

Whereabouts in the time-line does the story take place and how much is Earth-616, and how much falls into our own Aconyte-618?

I left the exact time-line entry nebulous in order to not step on any pre-existing toes. It takes place in the Aconyte-618 setting that’s been established for these novels, which means that it’s very close to the “main” 616 that people will be accustomed to, but it isn’t definitively the same setting. Victor, for example, suffers a rather grievous injury in 616, and suffers the same wound in my novel in 618, albeit in different circumstances. Being allowed to play around a bit like that was very enjoyable, but I hope I’ve kept it as close to the 616 Victor that people already know and love as possible.

If you were to manifest a superpower what would you want to be able to do?

Teleportation. No more walking for me! I’d say I would never be late again, though I’d probably still somehow contrive to be.

What do you think of the cover?

“This is a tight, fun little read that feels incredibly fresh. There’s almost no fat in the book with a plot that moves from point to point agilely… This utterly drips with comic book energy.” 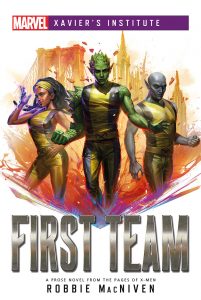 Victor Borkowski – aka Anole – has adjusted well to life at Xavier’s Institute, gaining control over his reptilian mutant powers and the respect of his fellow students. However, when he discovers that his parents have been kidnapped by anti-mutant extremists, the Purifiers, Victor’s discipline and trust in the X-Men is strained to breaking point. Setting out alone in defiance of his instructors, he’s quickly in serious trouble. It isn’t just the fanatical Purifiers threatening his family, there’s a villainous scientist waiting to get hold of Victor himself. Maybe he can’t do this by himself after all…

Reviewers can request a review copy from NetGalley here