Join us in Terrinoth for epic adventure you’ll not soon forget. Introducing The Doom of Fallowhearth, by Robbie MacNiven

Legendary heroes battle the undead and dark sorcery, in the first of a rip-roaring new series for the fan-favorite epic fantasy game.

Aconyte Books are excited to announce our first novel set in the Realm of Terrinoth, based on Descent: Journeys in the Dark. The Doom of Fallowhearth, by Robbie MacNiven, releases worldwide in October 2020.  Let’s take a closer look at the story and that cover art.

Embark on a quest, venture into dangerous forests, and stand together against evil.

When the Baroness of Forthyn’s daughter disappears, she calls on the legendary orc hero, Durik, to find her. Durik enlists his old questing partners – the dwarf alchemist, Ulma Grimstone, and roguish Logan Lashley – in the hopes of reliving their glory days. Together they journey to fear struck Fallowhearth. But instead of clues, they uncover necromancy: graveyards emptied of corpses, with trails of footprints leading into the sinister Blind Muir Forest. But the forest holds more than just the walking dead: between its boughs lurk treachery, a sorcerous ally turned to darkness, and a shocking infestation of giant, murderous monsters.

and now, THE COVER…

You know instantly that this is going to be an epic quest. There’ll be magic, spooky forests, and a few undead to keep our heroes busy. 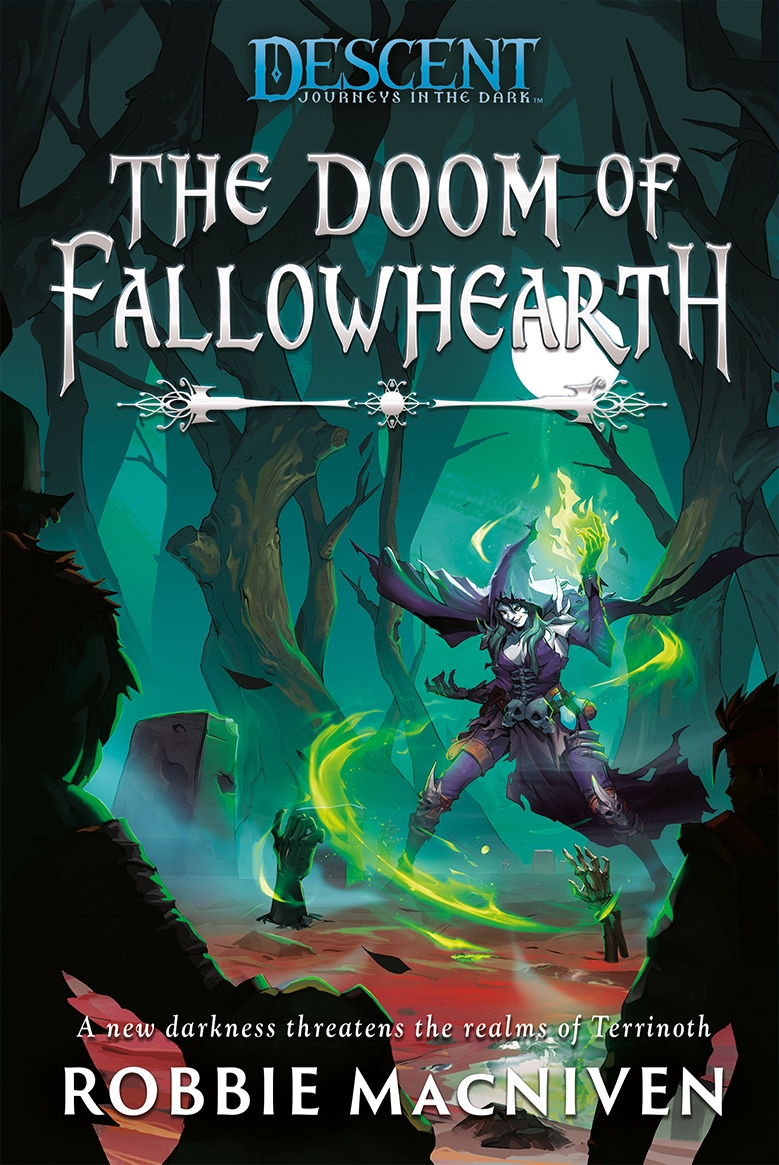 We managed to sneak in a quick catch-up with Robbie to hear some more about creating the novel.

You’ve written a lot of grimdark stories over the years. Descent is more of your classic fantasy dungeon crawler and as such the tone is quite different. How, if at all, did you need to adapt your writing style to fit the Realm of Terrinoth?

I didn’t feel like I had to make too many changes to my writing style. While it might not be traditional grimdark, there’s a reasonable amount of bleakness, grit, and tragedy running through the story. That’s very much born out of which corner of Terrinoth this takes place in – Forthyn is a hard, rugged land, a frontier place where survival can be challenging even for the barony’s more privileged inhabitants. That being said, I enjoyed cutting loose with different fantasy tropes and elements I’ve not been able to utilize in my writing before, including things like having the orc of the group be the biggest voice of reason in times of conflict!

Your story centers around a well-known group of characters from the Descent games. How prepared did you feel to give these characters a voice, what experiences did you draw on to create them?

When I first took on writing a novel for the Descent setting I trawled through every character mentioned in the games. I considered a few combinations and thought about creating my own, but eventually settled on the heroes from the Labyrinth of Ruin expansion. I thought it would be good to flesh out characters that players may already have used in their games, and picking a “pre-set” group gave me what I felt was a solid foundation to build an adventure on. I especially enjoyed the Labyrinth gang because they’re such a blend of the familiar and the unusual – the aforementioned orc who’s stoic and protective, the rogue whose greed and cowardice are constantly in competition with one another, the dwarf who just wants to try out her latest madcap experiments on whoever is closest. They’re a great bunch to build a cast of secondary heroes and villains around, and as the story went on they increasingly developed a life of their own. I feel like, ultimately, this is a character-driven story.

Terrinoth is a world of forgotten lands and lost legacies with a lot of pre-existing lore. Does having a lot of this background information make it easier or harder for you to create a story set in the pre-existing world?

I find that it’s a positive thing. I’d certainly rather have a lot of lore while seeking out a somewhat less-developed area to expand into than have to build everything from the ground-up. I guess that’s part of the fact that I’ve always been a tie-in writer first and foremost, but I enjoy showing readers new aspects of something that’s already been established. It also helps that the Descent lore is a lot of fun, painting in those broad, classical fantasy brushstrokes while leaving room for fresh interpretation. Hopefully, I’ve brought something interesting and new to that well-stocked table.

ROBBIE MacNIVEN is an author and freelance journalist living in the Highlands of Scotland and currently enrolled as a student at the University of Edinburgh, studying History. He is the author of several novels and many short stories for the New York Times-bestselling Warhammer 40,000 and Age of Sigmar universe, and the narrative for HiRez Studio’s Smite Blitz RPG. 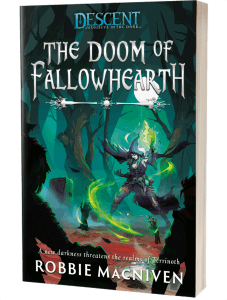 The Doom of Fallowhearth is available to pre-order worldwide from all retailers now!

Stay up to date with all our novel news and announcements here: