A Cover So Beautiful, It’ll Haunt Your Dreams

The mysterious disappearance of a gifted student at Miskatonic University spurs his troubled roommate, Elliott Raslo, into an investigation of his own. But Elliott already struggles against the maddening allure of a ceaseless chant that only he can hear… When Elliott’s search converges with that of a Greenland Inuk’s hunt for a stolen relic, they are left with yet more questions. Could there be a connection between Elliott’s litany and the broken stone stele covered in antediluvian writings that had obsessed his friend? Learning the answers will draw them into the heart of a devilish plot to rebirth an ancient horror.

and now, THE COVER…

You may recognize the art-deco style of this one as that of The Last Ritual, which we announced at the end of last year. We asked the master of the surreal and the wonderful, John Coulthart to create for us another stunning piece of art. We’re very happy he said yes. 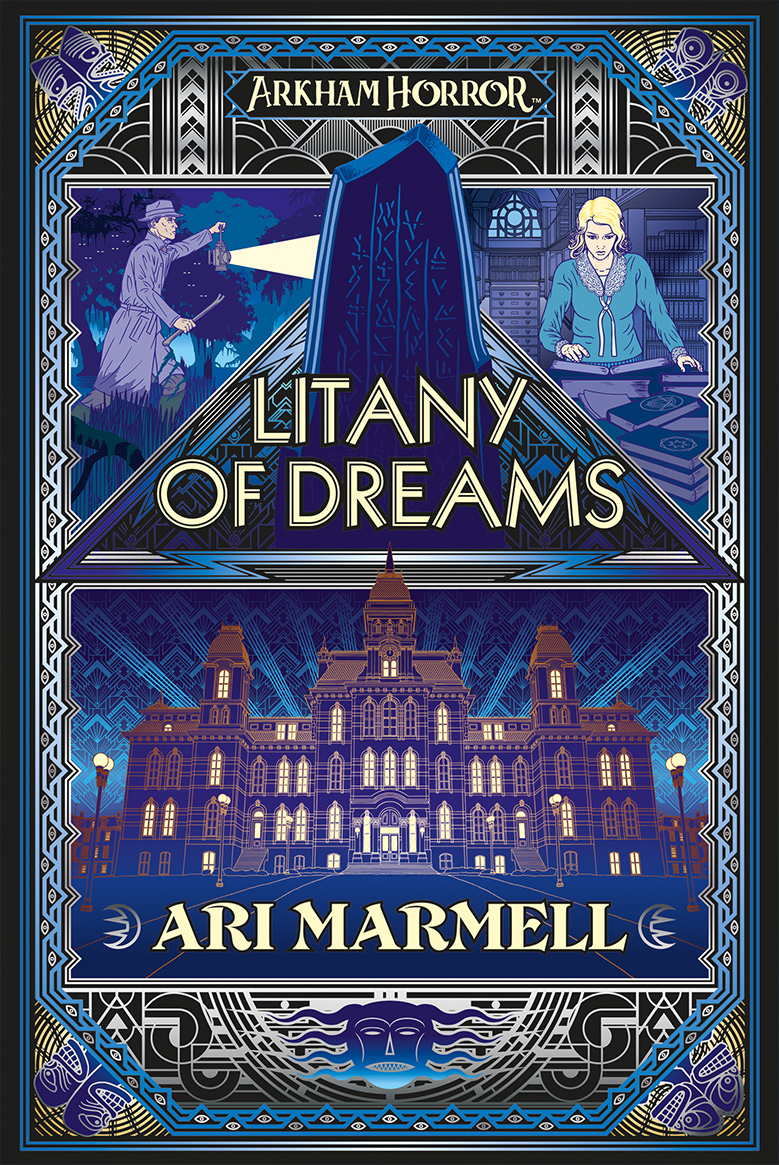 …and what does Ari think of the cover?

“The overall style feels very 20s–my first thought when I saw it was that it put me in mind of The Great Gatsby–while still capturing both a subtly creepy/horrific feel. I particularly appreciate the artistic flourishes in the border art, given the presence of a Kalaallit Inuit character among the protagonists. Very nicely done”.

You’re no stranger to the tie-in fiction world, with novels set in the worlds of Darksiders, Magic: The Gathering as well as RPGs. What made you want to pitch and write a story set in Arkham?

Precisely because it is Arkham. I’m a fan of the sort of cosmic/inhuman horror that Lovecraft helped pioneer. I’ve previously written some Lovecraft-inspired short stories, and I’ve occasionally included minor elements of that kind of horror in my fantasy novels. But I’ve never had the opportunity to play in the actual Mythos sandbox, so to speak, nor to write an entire novel-length work of that particular tone and feel. The chance to not only work in the tone of Lovecraft but with his actual toys, so to speak–and to do so from new angles and sensibilities–was far too enticing to pass up.

This is the first of our novels to be set within the Miskatonic University. Why did you choose this as your setting for the tale?

Honestly, it was barely even a conscious decision. I knew, with the story I was envisioning, that some of the characters had an academic background and that the plot and character motivations would partially revolve around an institution focused on both research and archaeology. Given my desire to make use of the Mythos as written, and the game on which the line is based, it wouldn’t have made sense to me not to use Miskatonic.

Arkham Horror is a much-beloved game famous for its cosmic horror. Up until now, our range has been more Pulp mystery than horror based. Is that all about to change?

I’d say so, yes. The book isn’t 100% horror start to finish–there are certainly mystery aspects to it–but I would overall call it horror novel, in terms of general category. As I said above, that–to me–remains the essence of what Lovecraft, and the sub-genre he inspired. And again, even my non-horror fantasy frequently includes some fairly dark scenes. I want to be clear that I’m speaking solely of my own preferences as a writer here, not about what anyone else should choose to write or read–but for me, writing in a Lovecraft-inspired setting without the substantial focus on the horror would have felt wrong, and as a missed opportunity.

When Ari Marmell has free time left over between feeding cats and posting on social media, he writes a little bit. His work includes novels, short stories, role-playing games, and video games, all of which he enjoyed in lieu of schoolwork when growing up. Ari currently resides in Austin, Texas. He lives in a clutter that has a moderate amount of apartment in it, along with George—his wife—and the aforementioned cats, who probably want something.

2 thoughts on “A Cover So Beautiful, It’ll Haunt Your Dreams”