Asmodee Entertainment is delighted to announce that Aconyte, the fiction imprint of global games group, Asmodee, has secured a multi-year agreement with Ubisoft® to create brand new novels set in the various eras of their Assassin’s Creed® video games. Already announced as Ubisoft’s go-to fiction partner for novels for adult readers for properties like Watch Dogs® and Tom Clancy’s The Division®, Aconyte’s primary mission is to publish untold stories from new or under-explored corners of the game series’ history-spanning timeline, featuring both characters from the games and totally new creations. 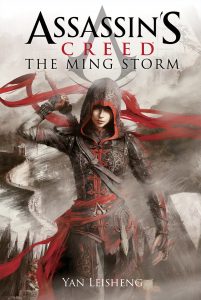 The first fruits of the new deal will be the publication of The Ming Storm this June. The novel is the opening volume of an exciting trilogy set in 16th century China, featuring young assassin Shao Jun. Written by notable Chinese author Yen Leisheng, the novel has already been published in China and France, with editions in several other languages planned.

This will be followed in early 2022 by a new trilogy of novels set in the time of Ubisoft’s latest smash-hit game Assassin’s Creed® Valhalla, which offers players the captivating experience of playing as a legendary Viking warrior leading their clan to glory in 9th century England. A third trilogy of novels in a wholly new historical setting is in development too.

“We’re absolutely delighted to add Assassin’s Creed to our ranges of new adventures set in the amazing worlds of Ubisoft’s games,” said Aconyte’s publisher, Marc Gascoigne. “The chance to tell wholly new stories set this rich universe, featuring both new and fan-favorite characters, was far too tasty to miss!”

“We are really happy to team up with Asmodee Entertainment. Thanks to their expertise in transmedia storytelling and community engagement, we will expand the Assassin’s Creed universe with new, original stories told through a range of compelling novels,’’ said Julien Fabre, Ubisoft Associate Director, Publishing & TV Distribution.

Aconyte Books is the publishing arm of Asmodee Entertainment, a platform of global games publisher and distributor Asmodee. Its mission is to extend Asmodee’s intellectual properties into novels and comics, TV/film, location-based entertainment, and consumer products, working closely with Asmodee Boardgames and Asmodee Digital. As well as novels from the many worlds of Asmodee’s games, Aconyte is also extending its catalogue with key partnerships, including several ranges of novels set in the rich worlds of Ubisoft’s computer games and Marvel comics. Learn more at aconytebooks,com and asmodee-entertainment.biz

Asmodee Group is a leading international games publisher and distributor committed to telling amazing stories through great games with many tens of millions of games sold in more than 50 countries. Through our portfolio of iconic game titles, including Catan, Ticket to Ride, Pandemic, Arkham Horror, Splendor, KeyForge, Dobble/Spot it! and Star Wars: X-Wing, we create a dynamic transmedia experience for players across a variety of digital and physical platforms. Asmodee also creates inspiring and innovative products in partnership with leading entertainment and technology companies. Asmodee operates in Europe, North America, South America and Asia and is headquartered in Guyancourt, France. Learn more at corporate.asmodee.com.

Since it first launched in 2007, the Assassin’s Creed series has sold more than 155 million games worldwide. The franchise is now established as one of the best-selling series in video game history. Recognized for having some of the richest, most engrossing storytelling in the industry, Assassin’s Creed transcends video games, branching out into numerous other entertainment media.

Ubisoft is a leading creator, publisher and distributor of interactive entertainment and services, with a rich portfolio of world-renowned brands, including Assassin’s Creed, Far Cry, For Honor, Just Dance, Watch Dogs, Tom Clancy’s video game series including Ghost Recon, Rainbow Six and The Division. The teams throughout Ubisoft’s worldwide network of studios and business offices are committed to delivering original and memorable gaming experiences across all popular platforms, including consoles, mobile phones, tablets and PCs. For the 2019–20 fiscal year, Ubisoft generated net bookings of €1,534 million. To learn more, please visit ubisoftgroup.com.