Cover Reveal! The Night Parade of 100 Demons, by Marie Brennan

Chaos has broken out in the isolated Dragon Clan settlement of Seibo Mura. During the full moon, horrifying creatures rampage through the village, unleashing havoc and death. When the Dragon samurai Agasha no Isao Ryōtora is sent to investigate, he faces even greater danger than expected. To save the village, he must confront his buried past – not to mention an unexpected Phoenix Clan visitor, Asako Sekken, who has his own secrets to hide. The quest to save Seibo Mura will take the two samurai into the depths of forgotten history and the shifting terrain of the Spirit Realms… and bring them face to face with an ancient, terrifying evil.

Back in March, before the world exploded around us all, we announce our third novel set in Legend of the Five Rings‘ Rokugan. The Night Parade of a Hundred Demons by Marie Brennan releases in February 2021 and we couldn’t be more excited about it. L5R fans will recognize Marie for her work in L5R fiction, with her work included on the LCG cards, and series novellas. Fantasy fans will be well versed in her Memoirs of Lady Trent novels and many others. You can find the full list here.

Today we get to show you the amazing cover art. If you’re already a big fan of L5R then you may have already noticed that The Imperial Advisor podcast and website have had an exclusive reveal of the cover over on their site, they also did a special interview with Marie Brennan so do head over there to read all about the book and her work in Rokugan.

The cover for The Night Parade of 100 Demons has created by Nathan Elmer, who also created the cover for Curse of Honor for us. Looming in the background we have the helmet of the Dragon Clan, while demons take to the sky and race down towards the settlement of Seibo Mura, while our protagonists look on. The gorgeous blue hues allow this cover to pop next to the pinks and purples of Curse of Honor, we recommend displaying them face out on your shelf so your friends can all go “ooohhhh” and “ahhhh” at them…

You’re a fan of the Legends of the Five Rings RPG and have been playing it for a while now. Can you tell us a bit more about your home campaign and why you play L5R in particular?

My background is in anthropology and folklore, so what really sucked me in at the start was the world. It felt so rich and believable – in part because it draws so heavily on Japanese history and culture – and it was easy to look at it and imagine what kinds of stories I might tell there. A friend had invited me to play in a campaign, so I made an ise zumi character named Kinzen (which is still my handle on L5R forums), and then AEG put out a call for chapters for the sourcebook Imperial Histories 2. I riffed off a sidebar in Imperial Histories that speculated on what the Empire would have been like if a different Kami had won the tournament and wrote up the Togashi Dynasty . . . so you can probably tell I’m a fan of the Dragon Clan!

The Night Parade of a Hundred Demons is a fascinating part of Japanese folklore. What was it specifically that drew you to write about the Night Parade and its monsters for the book?

Because of my interest in folklore, I automatically gravitate toward the more spiritual and mystical aspects of Rokugan. It boggled me when I realized that apparently, L5R had never done anything with this particular idea – I mean, it’s such a fun concept, and all over the place in Japanese picture scrolls! But that meant it was untrammeled ground for me. I even have a reason in-story for why it’s never come up in the setting before (and why my characters don’t immediately realize what they’re dealing with).

You have a lot of experience with the world that L5R creates. What did you find the biggest challenge to be when converting your knowledge from an RPG to a novel?

That richness of setting can be a double-edged sword, especially when most of my writing for the franchise has been in the form of the short stories for the ongoing plotline. With those, I can take for granted that the audience either knows the world of Rokugan already or is willing to roll with unfamiliar concepts and terms. For a novel, though, I need to pull myself back into the mindset I use when writing my own books: this is all unfamiliar and needs to be introduced and explained as I go along. Plus, with a home campaign I can make things up as I please and not worry about them passing muster with the official Story Team – but here I’m adding to canon when I do that, so I have to be careful! 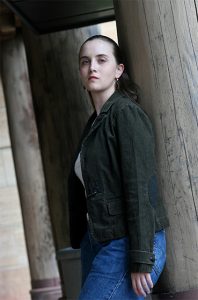 Marie Brennan is a former anthropologist and folklorist who shamelessly pillages her academic fields for material. She recently misapplied her professors’ hard work to Turning Darkness Into Light, a sequel to the Hugo Award-nominated series The Memoirs of Lady Trent. As half of M.A. Carrick, she is also the author of The Mask of Mirrors, first in the Rook and Rose trilogy. For more information, visit  swantower.com, Twitter @swan_tower, or her Patreon.