Last month Domino: Strays hit the stores across the USA, this month it is here in the UK as well. We thought it was about time we sat down and chatted with Tristan to find out a bit more about our luck-wrangling heroine.

Sharp-witted, luck-wrangling mercenary Domino takes on both a dangerous cult and her own dark past, in this explosive introduction to the new series of Marvel prose novels

The job: infiltrate a Chicago conman’s cult to liberate some brainwashed twins. For former X-Force operative Domino, that’s a “hell no”. Fanatics are bad news. She still has nightmares about Project Armageddon, the super-soldier program that wrecked her life and destroyed her family. If only she’d had someone to help her back then, someone… like her. It’s a total pain in the ass, but maybe it is time to finally face those demons. With her probability manipulating superpowers she can turn even the worst of situations to her advantage. 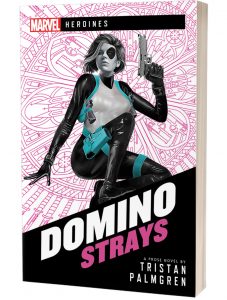 We’ve shown off the cover for this novel many times. We love its big bright colours and the stain glass effect in the background that depicts all Domino’s essential weapons. You can watch us talk more about the cover in the video below

… and now a quick chat with Tristan

Known for your historical fiction space operas, Quietus and Terminus, what made you want to write an action-adventure story set in the Marvel Universe?

My first books were big, thinky, complex epics – but wading neck-deep into philosophical science fiction isn’t the only thing I want to do. For as much as Quietus and Terminus spend time reflecting on death, tragedy, and the ways people react to it, my favorite bits to write were the action sequences: the bio-enhanced fist-fights and the space battles that left a good part of Earth’s atmosphere aflame.

When I found the opportunity to write a sharp, snarky, and more action-packed story, I dove right into it. The Marvel universe gives me the kind of scope and scale I’m looking for in the space operas I read and write, but also the chance to really zoom in and focus on a single character’s voice and tell a tight story – two things that are really only possible in an established universe and a long-running series. I knew right away that this was going to be a fun project.

Domino: Strays is the first in the new Heroines series from Aconyte Books. Domino has been around the Marvel Universe since the early 90s, but what made you choose her as your muse for this story?

Domino’s voice, her acid sense of humor, but most especially the way she’s unafraid to act in ways other heroes don’t see as heroic. Domino understands the difference between a principled decision and the right decision, and she’ll go for right over principled every day. Even when it costs her. The conclusion to the first story arc in Gail Simone’s 2018 Domino series, which I won’t spoil here but which you should definitely read if you haven’t, is a perfect illustration of that.

I also love to write complex, kinetic action sequences, and Domino’s Mutant ability is a perfect match for that. Domino’s luck power needs her to be active to function, and so Domino is compelled to always get in trouble, run into the fray, to throw the first punch, put herself at risk, and spread chaos. It’s tremendously exciting to write.

The Marvel universe is HUGE. There’s so much going on in the multiverse. Were you given specific guidelines on which timeline to follow, or did you get to choose?

One of the reasons I love working with Aconyte Books is that we were given a wide scope to pitch stories. I could go wherever the character and the universe led me. The more I read from and about Domino, the more the kind of story I wanted to tell took shape. I wanted to send Domino on a new adventure, but also dredge deep into her past and help explore what makes her work. Then this book’s multiple, interlocking timelines were born. Aconyte and my awesome editor, Lottie Llewelyn-Wells, set me loose, and here we are.

Am I allowed to say Domino? Is that gauche?

It’s hard to keep from smiling when I read anything about The Unbeatable Squirrel Girl. One of the things that make comics fun are the metatextual stories-outside-the-stories and nested references. Squirrel Girl deliberately ran counter to the dark and grim direction that comics were headed in the nineties and aughts, being an explicitly lighthearted, fun, Silver-Age-y character. But Squirrel Girl’s secret is that she wouldn’t be half as fun if she didn’t have a darker Marvel multiverse to react against. She lives in a universe that should not function by her narrative rules, but, damn it, she’s going to make it anyway.

Domino was a part of the grim-and-gritty direction Squirrel Girl was reacting against, but they’d get along. Domino operates under different narrative rules, but she could stand to learn that those rules can be bent. Neither of them takes themselves so seriously that they trip over themselves. A sense of fun is one of the most important parts of Domino’s character, and Squirrel Girl could really bring that out, and… hmm, now I’m thinking of team-ups…

You can also catch up with Tristan and Anjuli as they discuss in more detail Domino and their plans for the future.