We’re back again for a sneak peek at the titles that will take you through until the end of the year. These titles will be up online and with your favourite FLG or bookshop to pre-order very soon. As always there are a few unnamed titles that we’ll be announcing properly in due course. These are extra special super secret books that we want to make a big deal about, so they are getting their own announcement – make sure you’re signed up to our mailing list to hear about them first!

The pub dates quoted below are the US paperback and global ebook on-sale publication days. The UK on-sale date is currently 2 months behind as the books travel on their first adventure across the sea.

Our Marvel line-up is set to expand even further with epic tales and new Super Hero stories. The range continues with Asgardian legends, new mutants, and some extraordinary sorceresses. Which ones are you most looking forward to reading first?

Enter the Dark Dimension to defeat a supernatural tyrant with four extraordinary sorceresses in this exhilarating mystical adventure featuring Clea, Agatha Harkness, and Umar the Unrelenting.

The courageous hero Heimdall returns to save the Rainbow Bridge and Earth from dark sorcery in this swashbuckling fantasy adventure that follows on from The Head of Mimir and The Rebels of Vanaheim.

Dazzler, rock ‘n’ roll, and the children of Cyclops and Magneto launch into space and beyond in this electrifying trans-dimensional mission to foil a plot to remove mutantkind forever.

Our next Assassin’s Creed title continues the story started in The Ming Storm with China Chronicles fan-favourite Shao Jun.

Ancient Mongolia is the stage for the latest epic adventure in the award-winning Assassin’s Creed® universe, as assassin Shao Jun continues to fight a sinister plot that spells the downfall of the Brotherhood of the Assassins.

Operation: Crossroads continues as we follow new recruit, Maira Kanhai, in her next mission.

Thanks to the Division, hope is finally within reach – until a war between Gulf Coast factions exposes an old, brutal foe in this heart-stopping adventure, forcing Maira into a choice that will make her a hero or villain, and question what the Division stands for.

OCTOBER. Secrets in Scarlet, an anthology edited by Charlotte Llewelyn-Wells

A secret organization ruthlessly seeks power over supernatural terrors in this globe-trotting 9-story anthology of arcane mystery and adventure.

DECEMBER. Lair of the Crystal Fang, S A Sidor

Following on from the events of Cult of the Spider Queen our three investigators must confront the eldritch horrors of their past when a mysterious killer haunts the swirling sewers of Arkham.

We have a new epic tale that ties into the new Decent game, Legends of the. Expanding on the lore of Terrinoth that you and your friends will experience in-game.

A staggering fantasy adventure in the epic world of Descent: Legends of the Dark when a holy warrior and a legendary hero fight save a city from a demonic evil that threatens all of Terrinoth. Following on from The Shield of Daqan, Andira Runehand and Trenloe the Strong find themselves once again caught up in a sinister plot of demonic power. 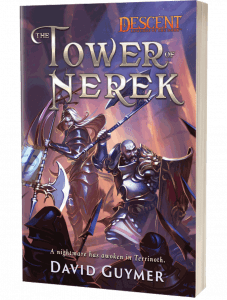 Set in the world of Legend of the Five Rings: Adventures in Rokugan RPG, this fantasy adventure pits noble samurai from each of the seven Great Clans, against a forgotten evil corrupting the whole realm. 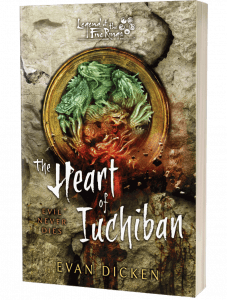 NOVEMBER. The Stars Beyond, an anthology edited by Charlotte Llewelyn-Wells

Just in time for the Twilight Imperium 25th Anniversary, an anthology of intergalactic civilization emerging from its war-torn ruins for the first time in generations to explore the galaxy. We’d love to tell you more, but we’ll leave that to the team at Fantasy Flight Games, so watch this space!

We’re back in the USA for our next Zombicide novel as we find out what happened to Westlake.

FEBRUARY. All or Nothing, Josh Reynolds

Caught between murderous humans and hungry undead, Westlake, now a newly resurrected zombivor, must survive a casino-turned-gladiatorial arena and his own growing bloodlust in this dark, yet vibrant splatterfest as we continue the story started in Last Resort. 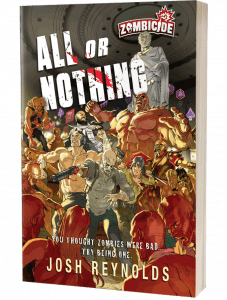 Well, that’s the lot. There are some absolutely cracking titles here, which are you most excited for!? Let us know on Twitter and Facebook now!

More details of these titles and more will be coming over the next few weeks, so keep an eye on our social media channels. Don’t forget to join our mailing list to make sure you find out more about these amazing books before your less-enlightened mates (and then tell them to sign up as well!)