Marvel: Legends of Asgard. The Head of Mimir. An Exclusive Interview with Richard Lee Byers

Now out in the UK in paperback is the epic story of Heimdall before his rise to Guardian of the Rainbow Bridge. We thought it high time we get together with Richard and have a chat about the novel and his experiences with tie-in fiction.

It is a dark time for Asgard. The Allfather is trapped in a bewitched Odinsleep, inspiring an all-out assault from the Frost Giants. They evade the gods’ defenses with uncommon ease as if guided by augury. Heimdall, a quick-witted young warrior still finding his place amongst Asgard’s defenders, believes it no coincidence that Odin lies enchanted and that the Giants are so well-informed. Sneaking into Odin’s inner chambers, he discovers that the severed head of Mimir, a great source of wisdom, is missing. Accompanied by his sister, Lady Sif, Heimdall must quest across the Ten Realms to retrieve it, lest mighty Asgard fall. 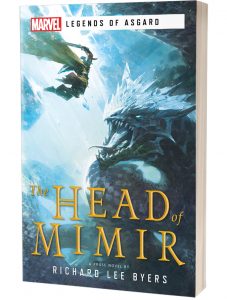 The Head of Mimir wasn’t what I was expecting going into the book, but it was such a pleasant surprise. In a time where comic heroes revolve around science and realism it’s so good to get a story that embraces the fantastical, that doesn’t feel the need to be gritty and true to life, but is content to be wondrous and over the top.

You can find out more about the fantastic cover by Grant Griffin in the video below.

You’ve written a lot of books for the Forgotten Realms as well as other fandoms. How have those experiences of writing in a pre-established world helped you to create a story in the Marvel Universe?

Writing in shared worlds, I’ve learned a couple of things. One is that you should tell compelling stories with real stakes that nonetheless don’t change the fundamentals of the setting that make fans enjoy it. Another is that you shouldn’t write assuming the readers are already familiar with the setting. Many no doubt are, but writers will end up with better, stronger books, books that might attract new fans. if they don’t get lazy. You should provide all the exposition, description, characterization, etc. that you would if writing the first novel about a setting that’s all your own.

The Head of Mimir is the first in the new Legends of Asgard series from Aconyte Books. What made you chose Heimdall over other legends?

Heimdall’s a pretty important guy in Marvel’s vision of Asgard, but the comics haven’t revealed a great deal about his background. That’s especially true of his early days, which makes them fertile ground for a writer. I can tell an origin story of sorts. I’m hoping Marvel fans would like to know what launched this dude on the path that ended with him being the All-Seer of the Rainbow Bridge.

Asgard is just one of the Nine Worlds in Norse Mythology. Your story takes us on a quest across the Nine Worlds on the search for the head of Mimir. Is there a world you liked writing in the most?

In the interests of accurate reporting, I should probably say that while my story visits a goodly number of the Nine Worlds, I didn’t manage to check in with all of them. Maybe next time as there are certainly more stories to tell about Heimdall. Anyway, to answer the question, all the Nine Worlds have features that make them well worth writing about, but of the ones that actually figure in The Head of Mimir, I guess I like Jotunheim best. As a writer of adventure fantasy, I like that it’s full of frost giants and other monsters and dangers. I also like that my protagonists are relatively as small as mice as they move around in Jotunheim. That conjures up interesting images in my head.

That’s a tough question because Marvel has so many great characters. My favorite tends to change with my mood and depending on which comic-book series is absolutely crushing it at a particular moment. But sitting here right now, I’ll say Doctor Strange with honorable mentions to Thor, Spider-Man, Hawkeye, the Thing, and the Hulk. As a fantasy and horror guy, I naturally like the Sorcerer Supreme at his lonely vigil defending us all from What Lurks Beyond, and there’s no doubt that the character has brought out the best in many gifted writers and artists over the years.

We continued our discussion with Richard over on Facebook Live, our Friday afternoon hangout.

The Head of Mimir is available to buy now!