Marvel: Legends of Asgard. The Sword of Surtur Cover Reveal

The God of War must explore a terrifying realm of eternal fire to reclaim his glory, in this epic fantasy novel of one of Odin’s greatest heroes

Tyr, God of War and elder brother of Thor, embarks on a quest to seal his place at Odin’s side. Spurred on by loyal young Bjorn Wolfbane and the bewitching Lorelai, the trio set out to steal a sliver of Twilight, the sword of the fire giant Surtur, who will one day bring about Ragnarok and destroy Asgard. But the fiery realm of Muspelheim is fraught with volcanic trolls, lava Kraken, and Surtur’s brood of murderous warriors. Tyr must overcome both his own feelings and the motives of his allies, or risk triggering the apocalypse and cursing his name forever.

And now the cover… 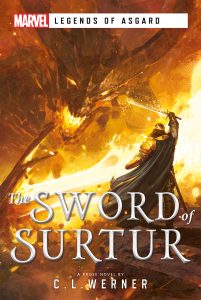 Created by the amazing Grant Griffin, who also did our The Head of Mimir cover, we have another epic battle between God and Monster.

We caught up with C.L. Werner for a quick chat about the book.

You’re best known for your dark fantasy work in the Warhammer Fantasy series’ within the Black Library, what made you decide to pitch for a Legends of Asgard story?

I have quite an interest in folklore and mythology (tempting as it is to say Norse mythology is a favourite, I don’t know that I can point directly there as a focal point) and always found it fascinating that Marvel brought the entire Norse pantheon into the same universe as all their regular heroes. It is such an odd idea on the surface, yet they really made it work in the comics. When Aconyte announced the Legends of Asgard books, I felt that with my background writing fantasy it would be an easier fit for me than delving into more contemporary settings and themes. Plus I get to play with giants and monsters, which is always a bonus in my opinion.

In the story, we follow Tyr, God of War. Why was Tyr the right fit for this tale, and what might readers learn about him and his cohort from the story?

For The Sword of Surtur I wanted to use a less well-known character from the Aesir/Vanir pantheon and Tyr simply felt right for the story. He’s Odin’s eldest son and a hero in his own right, sacrificing his hand to trap the Great Wolf Fenris. Since this brave deed, however, he’s been rather over-shadowed by his younger half-brother Thor. In the comics, this led to resentment and jealousy, with Tyr appearing as an adversary several times. I wanted to tap into that rich vein and explore it from Tyr’s perspective. While he has a brotherly bond with Thor, he’s also in that uncomfortable place of feeling as though he’s being forgotten because of all the great deeds Thor performs in the defence of Asgard (and, let’s be honest, sometimes from simple need to feel the thrill of adventure). Balancing these two different aspects of Tyr’s personality made him a very compelling personality to explore.

Tyr’s companions in the story are Bjorn Wolfsbane, an Asgardian hunter who grew up in the wolf-haunted forests of Varinheim where Fenris is bound, and Lorelei, the younger sister of Amora the Enchantress. Bjorn has more than a bit of hero-worship where Tyr is concerned, since of course Tyr is the one who chained the greatest wolf of them all. he’s a skilled tracker and fighter, headstrong and probably just a bit too ostentatious in his valour. Lorelei shares a common thread with Tyr in that each of them feels like they’re existing in the shadow of their more renowned sibling, though she comes at it from the other angle. While Thor is famous, Amora is a bit more on the infamous side. It is Lorelei who conceives of this bold plan by which both of them can leave those shadows and stand in the light of their own deeds, something that strikes at the heart of Tyr’s inner turmoil.

Marvel’s Ten Realms have a deep history in Norse mythology, how much of that pre-established world did you incorporate into your Muspelheim?

The Sword of Surtur is set far enough back that the ‘lost world’ of Heven is still cut off, so more often than not the characters will speak of Nine Worlds. Of course, Muspelheim is very much one of those realms that isn’t locked off, though few Asgardians would be reckless enough to venture there (and our roes are among those few). In crafting the novel’s version of Muspelheim, I drew more upon the comics and the approach they already took re-imagining the original myths than going back to the myths themselves. It is a really nasty place, with cinders raining from the sky and streams of molten lava bubbling across the charred ground. Developing some of the things that live in such a vicious landscape was itself a bit of a challenge, and with a bit less to draw from by way of either comics or myths, but I think readers will enjoy some of the hazards Tyr must face on the trek to Surtur’s fortress.

Who’s your favourite Marvel Character, and why?

That’s a really tough one. I’d say that Marvel’s version of Count Dracula has to be a contender. I used to come home with a fistful of back-issues of various Marvel horror comics when I was growing up and the interpretation of Dracula was always fascinating to me (helped I’m sure by an already unhealthy obsession for the character via Bela Lugosi and Christopher Lee). The writing in titles like Tomb of Dracula and Dracula Lives! were simply some of the best (though I’d be remiss not to tip the hat to Werewolf by Night) and they took the character to places you wouldn’t expect. Interestingly, the look of Dracula in the comics was based on Jack Palance… several years before he would actually portray the vampire on film.

If we took Dracula out of the equation though, since he does bring with him a pre-Marvel legacy, I’d have to say the Lizard. The first time I saw the Lizard was in the old Spider-Man cartoon and he was an instant favourite. Reptiles have always been my thing and this humanoid reptile trying to turn everybody into lizards immediately had me captivated. At one time I had every appearance the character made, whether he did so in Amazing Spider-Man or Secret Wars. There’s a lot of complexity to the character too and some of the comics writers have done great stories with the Lizard and the tragedy this recurring reptilian metamorphosis has on the family of Curt Connors. Then again, Marvel was good at doing that kind of thing, adding extra layers of complexity to characters who could easily be one-note baddies. So, yes, Dracula aside, the Lizard gets my vote.

Hmmm, I don’t know how much I can say without spoiling the surprise. The Kraken is a beast that immediately conjures images of Vikings sailing the seas in their dragonships only to be dragged down to a watery grave by the gigantic coils that rise from the depths. When populating Muspelheim with creatures that would feel right for a Norse tale, the Kraken immediately came to mind. Now, of course, fiery Muspelheim won’t have oceans of water, so a Kraken native to the place would have to be swimming about in something a good bit hotter. It has other adaptations as well, which I think makes for a particularly daunting ordeal for Tyr and his companions. Always make things difficult for your heroes and treat your monsters well, that’s my motto!

C L WERNER is a voracious reader and prolific author from Phoenix, Arizona. His many novels and short stories span the genres of fantasy and horror, and he has written for Warhammer’s Age of Sigmar and Old World, Warhammer 40,000, Warmachine’s Iron Kingdoms, and Mantica’s Kings of War.