Marvel Untold: The Harrowing of Doom

Notorious villain Doctor Victor von Doom has finally found a solution for his oldest obsession: rescuing his mother’s soul from the clutches of Hell. An alliance with the reclusive sage, Maria von Helm, has provided the key to Doom’s latest invention. Fusing their super-science and sorcery, Doom has created the Harrower, a device that will open a rift and wrench his mother’s soul from the netherworld. Back in the human world, however, rebel forces threaten to overrun Latveria and topple its dark leader – and revolution couldn’t come at a more dangerous time than when the gates of Hell itself have been unlocked.

Let’s look at that cover… 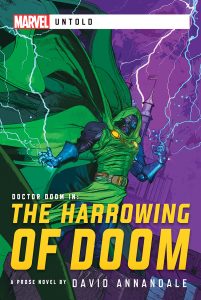 This bright and vibrant cover was created by the fabulous Fabio Listrani. We wanted something that paid homage to the classic comic book but still had the Aconyte flair that our ranges all possess.

And now, a quick chat with David Annandale…

You’re known for your Warhammer and WH40K novels – what differences and what similarities did you encounter while writing in the Marvel Universe?

There are, naturally, some pretty big differences between the Marvel and Warhammer universes, starting with the Marvel one being grounded in a version of our here and now, and things obviously not being quite as grimdark. On the other hand, both universes are home to bigger-than-life characters and wonderfully operatic, grandiose narratives. And in approaching the writing of a universe that is not my own, certain commonalities apply. There’s an awareness of the huge body of work that has come before, and the need to be respectful of the characteristics of this fictional realm. There is also the creative excitement that comes with having the chance to play in such a rich, vibrant universe where the creative possibilities are limitless.

The Harrowing of Doom is the first in the new Marvel: Untold series from Aconyte Books. Dr. Doom is the archnemesis of the Fantastic Four, and a fan favourite villain. What is it about Doom that made you want to tell a story from his point of view?

Doctor Doom has been my absolute favourite Marvel character for well over 40 years, so writing a book with him as the protagonist goes somewhere beyond the dream-come-true category. I wish I could travel back in time to the 1970s and tell my young self, who was busy reading and re-reading issues of Super-Villain Team-Up, that this day would come. One of the things I find so fascinating about Doctor Doom is that he is one of the best examples in contemporary popular culture of the classic Gothic Hero-Villain. We have in him a character whose lineage we can draw directly from John Milton’s darkly compelling Satan in Paradise Lost, and down through the Gothic novels of Ann Radcliffe, Matthew Lewis, Mary Shelley and so on, not to mention the influence of Lord Byron’s more tormented figures. Doom is powerful, tortured, driven, charismatic, and dangerous, heedlessly inviting catastrophe as he strives against colossal forces. What’s not to love? And in Latveria, we have a beautiful Gothic setting to boot.

Latveria is a small fictional nation under an enforced monarchy, how did you approach the world-building of this rarely described land?

I believe that Doom and Latveria shape each other. He is a product of this land, but his force of will and his presence are so powerful that the country also bears his indelible stamp. Given this element of Expressionism present in Latveria, and how it is frequently described as “fairy-tale-like,” my inspirations, along with the comics, including the strange European settings of the classic Universal horror films. At the same time, I want Latveria to be a very living place, so I want to get to know the people there, and think about the lives and hopes and dreams of its citizens, lives and hopes and dreams that must all exist within the shadow of that terrifying monarch. Since Latveria is more than Doom’s castle, I believe there is a lot to explore. For texture, I’m also taking inspiration from some of the towns I’ve visited in Central Europe.