Out today in paperback (USA/CA) and ebook (globally) is Liberty & Justice For All, where two exceptional students face their ultimate test when they answer a call for help, in the first thrilling Xavier’s Institute novel, focused on the daring exploits of Marvel’s mutant heroes.

As part of their training at the New Charles Xavier Institute, Triage and Tempus are allowed to attempt their first solo flying mission. Some way into their mission, they pick up an urgent SOS message – Sentinels are attacking a superpowered mutant, who is struggling to protect an injured politician. When they abandon their lesson and answer the call, however, the identity of both will cause the two young X-Men far more problems than they bargained for. 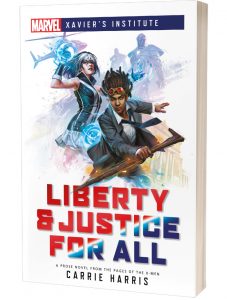 While strongly tied into the lore of the long-running Marvel franchise, it’s fresh, well executed, and gives some depth to the characters and their relationships.

As a certified geek, writing a Marvel novel must be a very exciting prospect indeed! What made you want to pitch Liberty and Justice for All to Aconyte Books?

“Exciting” doesn’t even begin to cover it. I’ve been on cloud nine ever since I got the thumbs up, interspersed with the panicked realization that I’m now one degree of writer separation from Stan Lee, not to mention all the other extraordinary folks who have written these characters ever the years. I just want to do them justice. (And liberty, har de har har.)

I became an X-Men fanatic in high school. I first got addicted to “Pryde of the X-Men,” which was an animated series featuring Kitty Pryde, aka Shadowcat. I’d always loved superheroes, and I caught every single movie and show that I could, but Kitty was the first character that I truly identified with. She wasn’t a princess, a scientist, or an astronaut hit by a stray ray of gamma energy. She was an average teenage girl next door, just like me. I’d wanted to be a lot of superheroes, but this was the first time I felt like I could fit into that world.

I was hooked. I started reading the comics. I watched all of the TV shows. To this day, I still harbor a deep, deep love for “X-Men: Evolution,” which was about the adventures of the X-Men, including Kitty, at school.

As soon as I heard that Aconyte was doing a series about the Institute, I knew I had to pitch something for it because it takes me back to the things that made me love the X-Men in the first place. They’ll always have a special place in my heart, and getting to be a part of it honestly makes me a little choked up.

Liberty & Justice for All is the first of the new Xavier’s Institute series from Aconyte Books. These stories follow the students and have an underlying concept of “firsts”. As such the protagonists are younger than the X-Men most will be used to from the films and such. What experiences have you been able to use to portray these younger characters’ experiences so many firsts?

That’s an excellent question! First, I should note that although the characters are younger, this is not a kids’ book! The students are mostly college-age-ish, and they’re dealing with some heavy stuff. This is not “Nightcrawler stole my homework” type kid stuff, although damn would that be fun to write. If this book had a rating, I think it would fit right in with the Marvel films: some violence but nothing incredibly graphic, some mild language, and adult themes out the ying-yang.

So the characters are new, but they’re not exactly kids. They’re beginning to develop their mutant abilities and figuring out for the first time exactly what they’re capable of. They’re stepping into the world of the X-Men for the first time and dealing with all of the things that come with that, like moral dilemmas and bad guys constantly coming out of the woodwork.

As a result, this isn’t your typical kids-at-school story. I drew less from my own school experiences and more from those times when I took risks and stepped out of my comfort zone—such as applying to write a Marvel book when I idolized the writers! It’s been exhilarating and terrifying at the same time, and I think those are the kinds of experiences that really teach us something about who we are. Those are the kinds of firsts that I’m looking to write.

Can you tell us a bit more about the continuity of the Xavier’s Institute in the novel, for the fans, and also for those new to the Marvel X-Men Universe?

Yes! You’ll probably be sorry you asked because I love this stuff. I’ll try not to spoil the really good stuff, although by nature, a summary like this is going to include some spoilers, so be warned.

First off, it’s important to know that “Liberty and Justice for All” is based on the timeline from the comics and not the Marvel Cinematic Universe. But what I’ve tried to do is write a book that Marvel fans who have never read a comic will understand and enjoy, which also includes Easter eggs and references that a true comic aficionado will enjoy too. Hopefully, I did a good job with that.

This book is set after an apocalypse-level event called M-Day, in which most of the world’s mutant population lost their powers or died. So if you’re thinking of the Xavier School as a big fancy mansion full of kids with the X-Jet in a hangar hidden under the basketball court, it’s not that. After M-Day, the mutant population was in a shambles. Bad guys became good guys and vice versa; friends became enemies (and also vice versa). And sadly, a lot of fan-favorite mutants died or were depowered, although, in true Marvel fashion, dead people don’t always stay dead, and powers sometimes come back. The school served as a safe haven for mutants during this time, but as for teaching? Well, most of the students were dead.

A while after M-Day, new mutants started popping up again, giving rise to hope that maybe they wouldn’t go extinct after all. They needed to be taught, but there was just one problem: Professor X was dead. (I won’t tell you the details. There are some hints about it in “Liberty and Justice for All,” but it’s a really great storyline that I can’t bring myself to spoil.) Cyclops and Wolverine have had a falling out over the whole deal, and they’ve each founded their own school. Wolverine runs the Jean Grey School for Higher Learning at the mansion. Cyclops runs the New Xavier School out of the former Weapon X facility where Wolverine got his adamantium skeleton. My book is set at Cyclops’s school. For fans of the comics, it would fall somewhere between issues 14 and 17 in Uncanny X-Men Volume 3.

I’ll stop there, but the school goes through a few more changes that are really fun. Like, it gets a wing made of ice courtesy of Iceman. I’m incredibly jealous because it sounds like a heck load of fun to go to school in an ice castle. It’s interesting to watch how the school changes based on who’s running it and what’s happening in the Marvel universe at that time.

Well, Kitty, obviously. But since I already talked about that, another of my favorites is Scarlet Witch. Wanda has such a complicated, amazing story. It gives me all the feels. If you’re looking to get into the comics, be prepared: Wanda’s character arc will gut you. It’s so delightfully tragic. I also like the fact that her mutant power has so much flexibility in how it can be used. I love seeing creative uses of cool abilities, and I tried hard to bring that to “Liberty and Justice for All.” When you’ve got a lot of fight scenes, variety is a good thing. That’s part of the reason why I deliberately chose characters with somewhat unusual powers to feature in the book. It made me work to figure out how to use them creatively, just like Scarlet Witch does.