Today is very exciting as we get to show off the cover of our next Legends of Asgard novel, Queen of Deception, by Anna Stephens. This stunning cover was created by Grant Griffin who has done quite a few of our Asgard series covers now. Go check out his work!

Aconyte: Lady Sif and Brunnhilde are back, what should we expect from this new adventure?

Anna: New enemies, a new Realm, but the same Buddy Cop vibes from The Serpent and The Dead as Sif and Brunnhilde try to discover the source of a threat, not just to Asgard, but potentially to all Nine Realms. Queen of Deception features fewer battles and more detective work, which left space for me to really dig into their relationship and bring the humor of a long and often fraught friendship into the light. There are, of course, lots of themes of honor and duty at stake, too, plus a healthy dose of magic and mysticism.

This is your second novel featuring Lady Sif and Brunnhilde, what it is that draws you to these characters?

What I love about Sif and Brunnhilde is the complexity of their friendship. They’ve both lived for an extremely long time, and for much of their (very long) youth, they were bitter rivals. The softening of that rivalry into respect and then grudging – and then deep, passionate – friendship is a source of fascination to me, even if it is without the scope of these books.

I’m also deeply drawn to what makes both of them tick. Lady Sif’s trauma – Loki’s theft of her golden hair – may on the surface seem immensely vain, but it was the theft of an intrinsic part of who she was. A violation she’s never truly recovered from, and one that forms a core reason for her rigid sense of honor and duty: she refuses to see anyone suffer the way she did.

Likewise, Brunnhilde is deeply attuned to her duty as the Leader of the Valkyrior, but not because of the glory or standing it gives her among other Asgardians: she has the profound honor of being the last thing the dying see and the first person they speak to upon beginning their afterlife. It is both a gift and a burden and one that ensures she never takes her own immortal life for granted.

Tell us about the challenges of writing warrior women in Elizabethan England, considering the total cultural shift.

It was definitely a challenge to write about such amazing warriors, who just happen to be female, in a world that doesn’t believe they can or should fight. There was a certain level of ignorance, prejudice, and misogyny that I had to bring to the world and characters that, frankly, made me feel a bit grubby. On the other hand, it did make it extraordinarily satisfying when Sif and Brunnhilde got to go Full Asgardian Badass on their opponents. I tried to imagine what people (men) would say or think when they saw them fight when it was right before their eyes. How they would justify and explain away what they’d witnessed as a trick, and exactly how that would make the Asgardians feel to be so ignored and unseen, their accomplishments dismissed.

It’s not something either of them would have dealt with before, but it is something that marginalized people of all genders, let alone other marginalizations, face in the world today. It was both fun and important to me to bring that sense of utter frustration and impotence to the page through the lens of two incredibly powerful warriors whose talents can’t be denied – and yet somehow are. Repeatedly.

Why did you choose this era of history for the story to play out?

We really wanted to put all the Asgardian characters – not just Sif and Brunnhilde – in a world that absolutely doesn’t know how to deal with them. A world where they’re not respected for their abilities, but suspected for them. A world where witchcraft leads to very dire consequences and the only other warrior woman who achieved fame in Europe was burned at the stake for heresy. There’s a very real sense of danger from the civilians surrounding them – even though physically they’re no match for Asgardian goddesses, their entire way of life and even their religion reinforces the idea of women as helpless, subservient, uneducated, and incapable of either physical or mental prowess. Sif and Brunnhilde need to somehow navigate a path that pays lip service to this while not losing sight of themselves or their abilities. It’s a fine – and frustrating – a line they’re forced to walk, so obviously, how could I not put Lady Sif in that situation?

I also got to play around with some real Elizabethan characters, whether they had a single mention or a greater presence in the story, which was great fun.

If you were an Asgardian what would your role be within the Realm?

Ha! I’d like to say I’d be a warrior fighting for Asgard and Odin, but it’s more likely I’d end up being one of the hapless grooms who have the misfortune to care for Aragorn, Valkyrie’s winged steed. 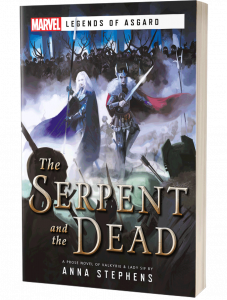 Read the first adventure of Lady Sif and Brunnhilde as they battle across the Ten Realms in The Serpent and the Dead, available globally now.