New from Marvel Heroines: Super Hero mercenary Silver Sable takes on Doctor Doom in a high-risk heist where success or failure will change the fate of a nation

Today we get to show off the beautiful cover for our next Heroines novel featuring Silver Sable. Bastien Jez has created a bright and bold cover that is just stunning. Take a look!

Aconyte: What can we expect from our next Heroines novel?

Cath: Silver Sable: Payback is unique in that you’re getting two heroines for the price of one! It’s got a lot of action, which I always love to write, but that’s tempered by a lot of personal breakthroughs with Silver around her past, her mission, and what she wants for her future. Expect a lot of fun, some serious introspection, and snark. So much snark.

You have written our first heroines team-up, that’s very exciting! How did you balance the very different personalities of Silver Sable and Black Cat?

I love these two ladies individually, but they also share a lot of history in the comics. When you put them together there are some in-jokes ready to go, everything from being mistaken for one another (it’s the hair) to sharing an ex (not Spider-Man, another ex). In the end, Silver Sable and Black Cat both know how to put their issues aside and focus on their mutual goal. It was extra fun figuring out how to integrate their teams without everyone wanting to scream bloody murder 😉

You also included Dr. Doom in the story. This is the first time we’ve seen him outside of David Annandale’s trilogy and the first time we get an outsider’s perspective of him. What was it like writing an anti-hero that already exists in our Aconyte x Marvel universe?

I love David’s books, and I tried to be true to the representation of Dr. Doom that he’s already set forth in our corner of the universe. Doom was perfect for this novel because he and Silver Sable have actually worked around each other a lot in the comics. I was reading up on what had happened in Symkaria (her home country) lately and when I saw it was under Doom’s authority at the moment–bam. I knew I needed to work him into this one. Plus, he’s just SO POWERFUL. Sometimes it’s nice to be able to look at a character and go, “Yep, this ridiculous thing I’d like to pull off is feasible.”

What was your favourite part of writing a heist novel, and what was the most challenging?

I love heist novels. I just love them, and heist movies. The best part to me is the combination of action and mystery–what’s going to happen next, how are they going to get around this obstacle, will they make it out in time? Plus, heists are perfect for team books, and Payback has a lot of characters to put to work. On the challenging side–figuring out who’s going to do what, how to pull it off, where to put in a twist…that was SO hard. I made maps, I made timelines, I made lists…I’m glad that part is over, lol.

You’ve written a few Marvel Heroines novels for us now. Who’s your favourite and why?

The Heroines novels are my absolute favorite. I own the entire line because it’s such a fun way to get to know characters who deserve their chance in the spotlight. But my personal favorite? Oh my gosh. I love them for different things, but I will say Black Cat’s snark is hard to resist. When I got the chance to team her up with Silver Sable I was over the moon.

That said, when Elsa Bloodstone showed up in the Marvel Halloween special, Werewolf By Night, I was so thrilled to see her on the screen! MORE ELSA BLOODSTONE!!! 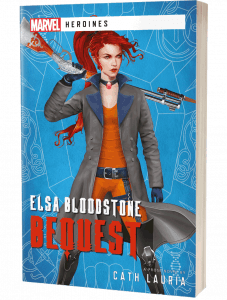