Asmodee Entertainment is delighted to announce that Aconyte, the new fiction imprint of the global games group Asmodee, will be the North American publisher of ASSASSIN’S CREED® VALHALLA: GEIRMUND’S SAGA, the tie-in novel to the eagerly awaited Assassin’s Creed Valhalla game coming this November from Ubisoft®.

The latest installment of the world-famous Assassin’s Creed® game line (over 140 million copies sold) brings the focus to the Viking era. The novel tells an original story set in the world of the game. Players can discover the epic tale of Geirmund Hel-Hide, a man determined to prove his worth as a Viking and a warrior. A perilous journey across the sea brings him into contact with a being out of myth and grants him a mysterious ring that promises both great power and bitter betrayal.

As Geirmund rises in the ranks of King Guthrum’s legendary army, he will have to use all his cunning to face the many dangers of a land ravaged by war. Fighting alongside his band of loyal warriors, his path will soon lead him into a conflict as old as the Gods themselves. 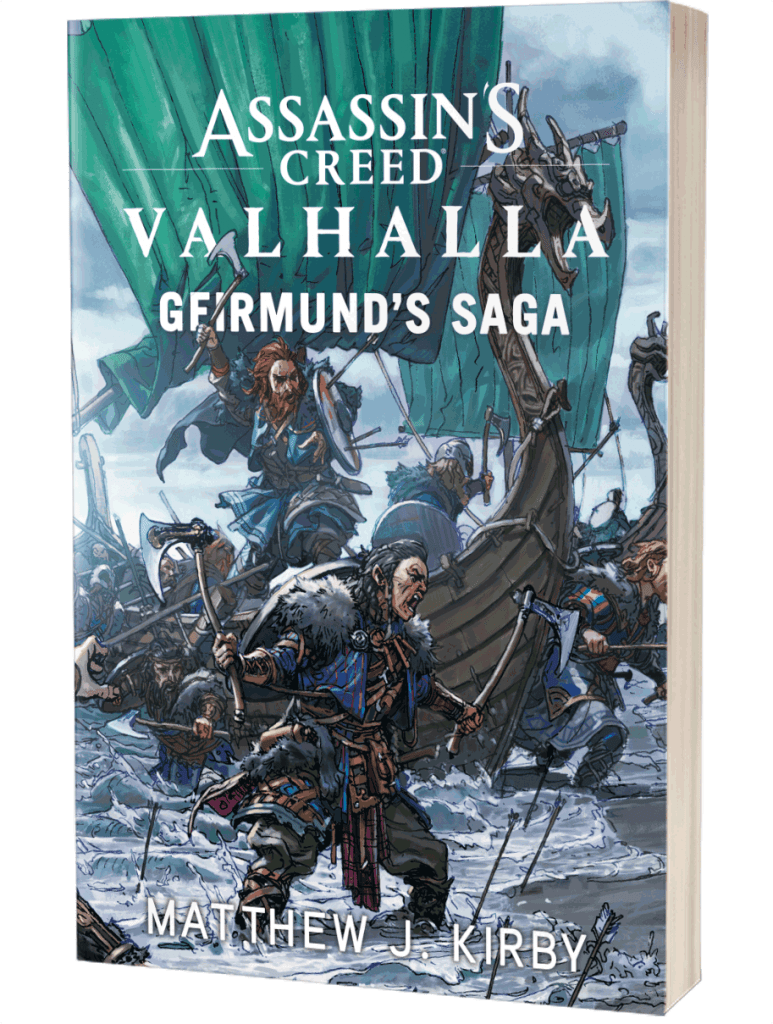 Matthew J Kirby is the critically acclaimed and award-winning author of the middle-grade novels The Clockwork Three, Icefall, The Lost Kingdom amongst others – and also the recent Assassin’s Creed® series, Last Descendants. He was named a Publishers Weekly Flying Start, he has won the Edgar Award for Best Juvenile Mystery, the PEN Center USA award for Children’s Literature, and the Judy Lopez Memorial Award. He is also a school psychologist, and currently lives in Utah with his wife and three step-kids.

As part of its ambitious mission to set up exciting new content platforms for both wholly owned and topflight third-party properties, Asmodee Entertainment have announced Aconyte’s plans to produce novels set in the worlds of some of Asmodee’s most popular games and more featuring a host of characters from the Marvel comics universe. The imprint’s mission is to go beyond tie-in fiction and novelizations, to produce vibrant stories with richly imagined characters in living, deeply realised settings. The list debuted in early September 2020, with sales and distribution handled by Simon & Schuster.

Asmodee Entertainment is a platform of games publisher and distributor Asmodee. Its mission is to extend Asmodee’s intellectual properties into TV/film, novels and comics, location based-entertainment, and consumer products, working closely with Asmodee Boardgames and Asmodee Digital. Through best-in-class partnerships across the full spectrum of opportunities, Asmodee Entertainment will create truly global intellectual properties and brands. Learn more at asmodee-entertainment.biz.

Asmodee Group is a leading international games publisher and distributor committed to telling amazing stories through great games with tens of millions of games sold in more than 50 countries. Through our portfolio of iconic game titles, including Catan, Ticket to Ride, Pandemic, Dobble/Spot it!, Arkham Horror, Splendor, KeyForge, and Star Wars: X-Wing, we create a dynamic transmedia experience for players across a variety of digital and physical platforms. Asmodee also creates inspiring and innovative products in partnership with leading entertainment and technology companies. Asmodee operates in Europe, North America, South America and Asia and is headquartered in Guyancourt, France. Learn more at corporate.asmodee.com.

Ubisoft is a leading creator, publisher and distributor of interactive entertainment and services, with a rich portfolio of world-renowned brands, including Assassin’s Creed, Far Cry, For Honor, Just Dance, Watch Dogs, and Tom Clancy’s video game series including Ghost Recon, Rainbow Six and The Division. The teams throughout Ubisoft’s worldwide network of studios and business offices are committed to delivering original and memorable gaming experiences across all popular platforms, including consoles, mobile phones, tablets and PCs. For the 2019-20 fiscal year, Ubisoft generated net bookings of €1,534 million. To learn more, please visit: www.ubisoftgroup.com.