Aconyte Shop Tales From the Crucible: A KeyForge Anthology

Tales from the Crucible

In the world of KeyForge

Take a whirlwind tour to the incredible planet of a million fantasy races, the Crucible, in this wild science fantasy anthology from the hit new game, KeyForge.

Welcome to the Crucible – an artificial planet larger than our sun – an ever-growing patchwork of countless other worlds, filled with creatures, sentient beings and societies stolen from across the universe by the mythical Architects. Across this dizzying juxtaposition of alien biospheres, the enigmatic and godlike Archons seek to unlock the secrets at the heart of the Crucible. Everyone else is just trying to survive… Explore nine tales of adventure in a realm where science and magic team up, of discovery and culture clash, featuring mad Martian scientists, cybernetic surgeons, battle reenactors, elven thieves, private investigators, goblins, saurian monsters, and the newly arrived human Star Alliance.

CHARLOTTE LLEWELYN-WELLS is a bibliophile who took a wrong turn in the wardrobe and ended up as an editor – luckily it was the best choice she ever made. She’s a geek and fangirl with an addiction to unicorns, ice hockey and ice cream.

DAVID GUYMER is a scientist and writer from England. His work includes many novels in the New York Times-bestselling Warhammer and Warhammer 40,000 universes, notably Headtaker and Gotrek & Felix: Slayer, and the bestselling audio drama Realmslayer. He has also contributed to fantastical worlds in video games, tabletop RPGs, and board games.

ROBBIE MACNIVEN is a Highlands-native History graduate from the University of Edinburgh. He is the author of several novels and many short stories for the New York Times-bestselling Warhammer 40,000 Age of Sigmar universe, and the narrative for HiRez Studio’s Smite Blitz RPG. Outside of writing his hobbies include historical re-enacting and making eight-hour round trips every second weekend to watch Rangers FC.

TRISTAN PALMGREN is the author of the critically acclaimed genre-warping blend of historical fiction and space opera novel Quietus, and its sequel Terminus. They live with their partner in Columbia, Missouri.

M K HUTCHINS is the author of the YA fantasy novels The Redwood Palace, and Junior Library Guild Selection, Drift. She is a prolific short story writer, appearing in Fireside, Podcastle, Strange Horizons, and elsewhere. A long-time Idahoan, she now lives in Utah with her husband and four children.

CATH LAURIA is a Colorado girl who loves snow and sunshine. She is a prolific author of science fiction, fantasy, suspense and romance fiction, and has a vast collection of beautiful edged weapons.

THOMAS PARROTT lives in middle Georgia, US with his wife and three cats. He is the author of several short stories and an upcoming novel set in the Warhammer 40,000 universe.

M DARUSHA WEHM is the Nebula Award-nominated and Sir Julius Vogel Award-winning author of the interactive fiction game The Martian Job, several SF novels, and the Andersson Dexter cyberpunk detective series. They have also written the Devi Jones: Locker YA series, and the coming-of-age novel The Home for Wayward Parrots. Originally from Canada, Darusha lives in New Zealand after spending several years sailing the Pacific.

C L WERNER is a voracious reader and prolific author from Phoenix, Arizona. His many novels and short stories span the genres of fantasy and horror, and he has written for Warhammer’s Age of Sigmar and Old World, Warhammer 40,000, Warmachine’s Iron Kingdoms, and Mantica’s Kings of War.

Praise for Tales from the Crucible

“I absolutely loved every minute of reading this anthology… If KeyForge as a game is even a tenth as fun, enjoyable and heartening as this anthology, then it will have found a dedicated fan in me and, I’m certain, many other readers.”
– SciFi and Fantasy Reviewer

“It’s been a total blast! As a reader who spends a lot of time exploring grim sci-fi, dark fantasy and horror, these bright and bold and colourful stories have been a real breath of fresh air. I can’t wait to read more from this setting!”
– Track of Words

“The collection flows really well from one story into another with aspects of the universe introduced in earlier stories being built upon in later ones… an amazing introduction to the world of KeyForge.”
– Big Geordie Geek

“I found each of the stories in this book to be an easy and delightful read. Each story has its own twists and turns, character moments and surprises… I’m really itching to get Keyforge back to the table soon. Not only that, but when I do play again, I feel as if I’ll be paying more attention to each card I play.”
– Boards & Swords

“I found the creativity shown by the authors in this book to be outstanding and they let their imaginations run riot building a world full of very complex characters that the reader invests in, very enjoyable read indeed.”
– NetGalley

“I really enjoyed the book. From its fast-paced, action-packed opener to its frolicking and fun ending. I was engaged throughout.”
– Rae Reads

Praise for Stories in Tales from the Crucible

“A tremendously fun story and an intriguing introduction to the IP. There’s clearly scope for more stories of Nalea’s escapades, so here’s hoping this isn’t the last we’ll see of her.”
– Track of Words on To Catch a Thief by Thomas Parrott

“The family connection provides the story’s heart, while the pace, excitement and enjoyable world-building all combine to keep the pages turning. All told it’s a really enjoyable story, and a great way of exploring the setting.”
– Track of Words on The Apprentice by Cath Lauria

“If you’re after a story about family wrapped up in a tale of strange creatures and stranger circumstances, this is well worth checking out.”
– Track of Words The Librarian’s Duel by M K Hutchins

“A fun, raucous and hugely enjoyable story.”
– SciFi and Fantasy Reviewer on The Librarian’s Duel by M K Hutchins

“Beneath the surface fantasy this is really a story about someone getting to grips with their grief and remembering that hiding from pain isn’t the same thing as healing, and it’s beautifully bittersweet.”
– Track of Words Useful Parasites by M K Hutchins

“It all comes together in an action-packed and delightfully unexpected ending that had me laughing out loud, ensuring that this was one of my favourite stories in the anthology.”
– SciFi and Fantasy Reviewer on Extermination Examination by Robbie MacNiven

“Think Pinky and the Brain with monsters and martians, and you won’t be too far off. Brilliant.”
– Track of Words The Perfect Organism by C L Werner

“Evocative, cunningly plotted and the most unusual stories in the anthology.”
– SciFi and Fantasy Reviewer on Wibble and Pplimz, Investigators for Hire by M Darusha Wehm

“A frankly brilliant and subversive take on both the KeyForge game specifically, and the scifi and fantasy in general.”
– SciFi and Fantasy Reviewer on Vaultheads by David Guymer

“Making full use of the wild scope permitted by the KeyForge setting, Guymer throws in all manner of madcap creatures and concepts, from elves, goblins and robots to rayguns, jetpacks and trading cards, but marries that with more than enough humanity to balance things out and produce a warm and character-led story beneath the craziness.”
– Track of Words on Vaultheads by David Guymer

“KeyForge is enthralling. As exciting to talk about as it is to play. It lives beyond the boundaries of play, and it promises to keep KeyForge going strong for months to come.”
– ArsTechnica

Interview with the editor, Charlotte Llewelyn-Wells
– Help from Future Self: A Conversational KeyForge Podcast

The world of KeyForge

In the center of the universe hangs the Crucible, an artificial world built from the pieces of countless planets. Over millions of years of new environments and societies being added to the world, cultures have expanded, creatures explore: adventuring, surviving, and even thriving. Meanwhile, Godlike Archons use the other inhabitants to compete in battle and unlock the secrets of the Crucible, gathering the mystical substance Æmber to enter Vaults hidden by the planet’s legendary creators.

“I absolutely loved every minute of reading this anthology… fun, enjoyable and heartening.”
– SciFi and Fantasy Reviewer 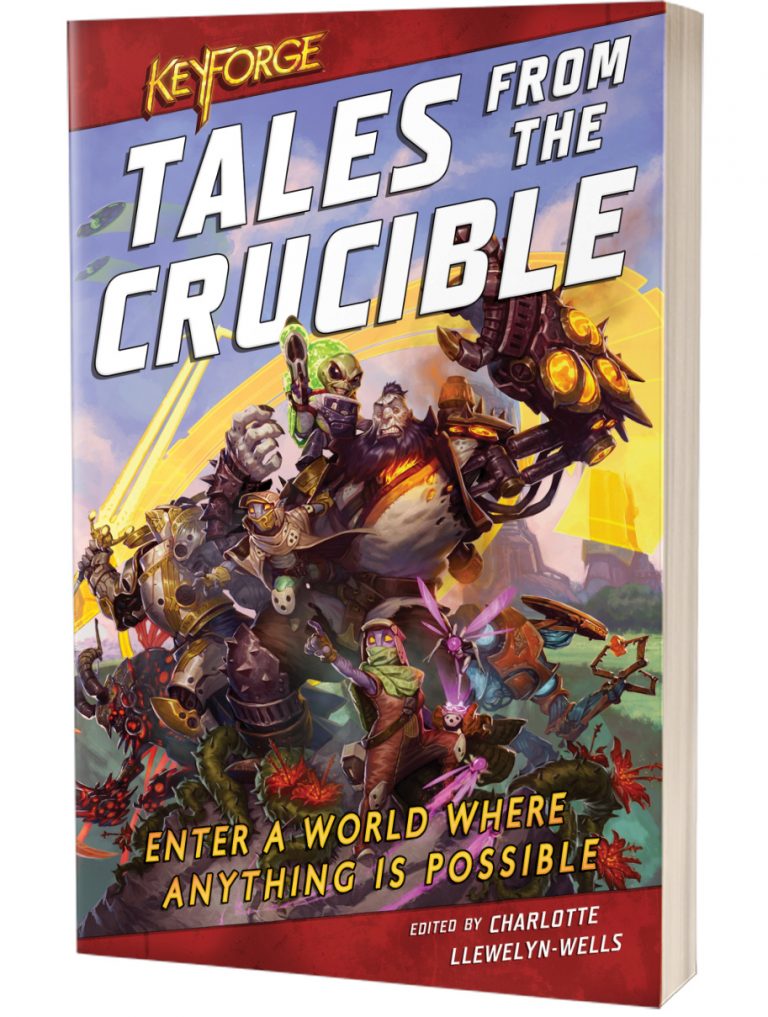 Pre-Order here
Other Titles in KeyForge

Amazing Stories in Other Worlds

Tales From the Crucible: A KeyForge Anthology

Pick up Tales from the Crucible
from your favourite vendor: 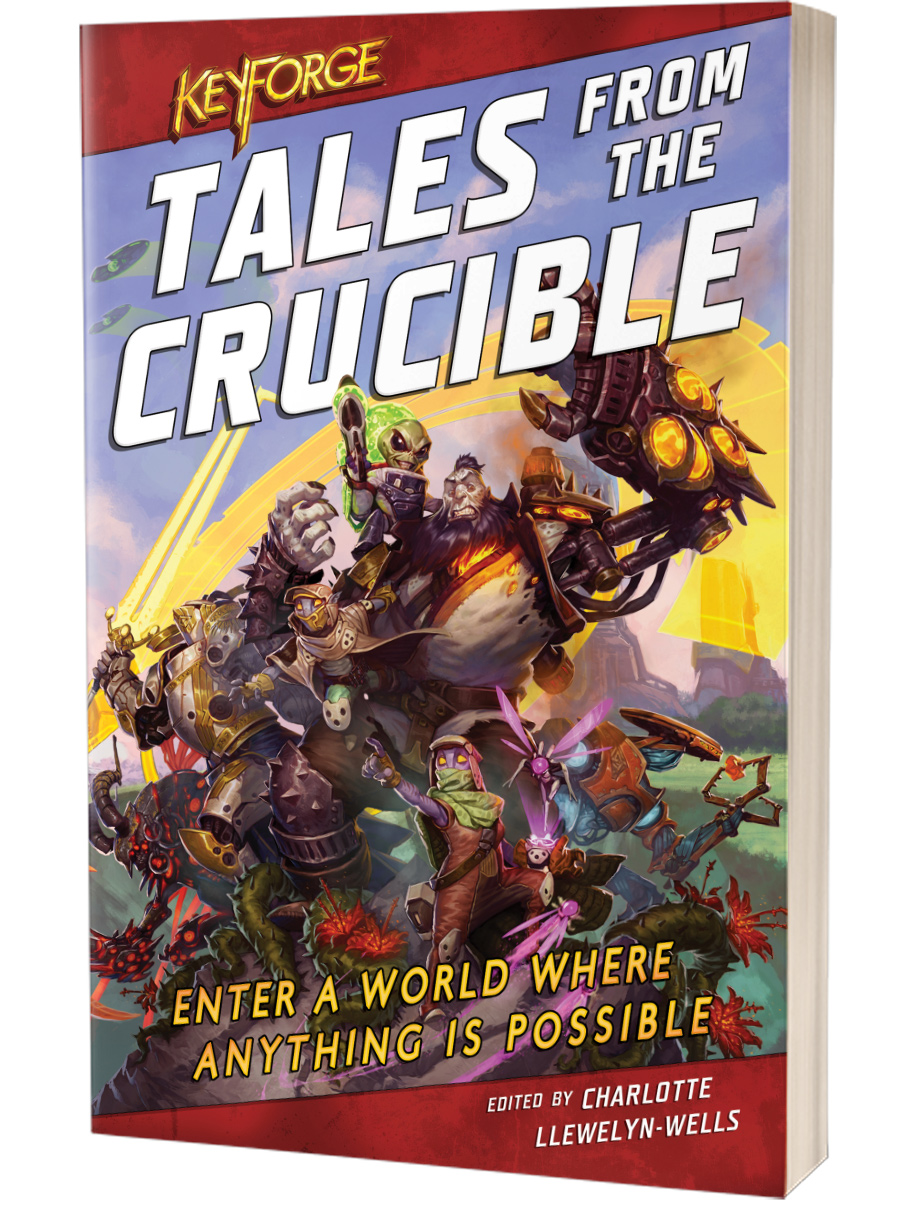