By day, EVAN DICKEN studies old Japanese maps and crunches numbers for all manner of fascinating research at the Ohio State University. By night, he does neither of these things. His work has most recently appeared in Analog, Beneath Ceaseless Skies, and Strange Horizons, and he has stories forthcoming from Black Library and Rampant Loon Press. 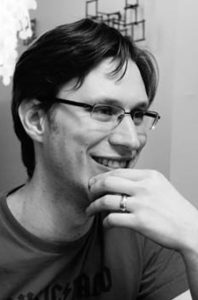 “Although there are numerous other threats to Rokugan (demons to the south, bloodspeaker cults, secret societies bent on destroying the gods, undead, dark sorcerers, corrupt spirits, etc.) To Chart the Clouds focuses primarily on Clan/Imperial politics, and the friction between various factions, specifically the proud and fractious Lion Clan, the shrewd and ambitious Scorpion Clan, and the Imperial Court attempting to maintain a precarious balance.”
– Track of Words

Fall Titles Announced! March 31, 2022 - We're back again for a sneak peek at the titles that will take you through until the end of the year. These titles will be up online and with your favourite FLG or bookshop to pre-order very soon. As always there are a few unnamed titles that we'll be announcing… Read more.

Spring 2022 Title Announcement! August 17, 2021 - We’re back again with a 2022 sneak peek of the titles coming to bookshops, FLGs, and ebooks in the Spring. Over the coming months, we’ll be releasing the amazing covers that you have come to expect from us. So, whether you’re waiting for another story from Viking raided England, an… Read more.
Reviews

“I had a lot of fun with The Heart of Iuchiban and I think it earns a four out of five.”
– Tympest Books

“Dicken crafted some top-notch puzzles for the characters to solve. I did really enjoy the story and do recommend it, especially if anyone is looking for a new series to draw them in.”
– Cosmic Circus

“All in all this was a brilliant addition to the growing Legend of the Five Rings line up and I cannot wait to read more in this line and more work by Evan Dicken who clearly knows the source material and is passionate about their writing.”
– What You Tolkien About

“I liked the character development Dicken gave us, as I came to like them…even the villains. He used ancient Japanese societal norms to twist the plot and simultaneously educate the reader. I feel a little more intelligent after having read this book.”
– Kindles All the Way Down

“The story is fast paced, and very smart, with Miya using her brain far more than brawn which is refreshing. There is plenty of action, but also lots of discussions of archives and the key to the story is cartography which can be pretty suspenseful when done right, and Dicken does so.”
– Goodreads

“Despite being set in an established world, Dicken builds on this and makes it his own. From the description to the people and landscape everything vividly comes to life while you are reading, and it is a joy to read. Particularly the description and information on the cartography itself – the detail is mind-blowing.”
– What You Tolkien About