Asmodee Entertainment is delighted to announce that Aconyte, the new fiction imprint of global games group Asmodee, will be publishing DAY ZERO, the prequel novel to the upcoming Watch Dogs: Legion® game from Ubisoft®.

Set in a darkly dystopian London just a few years from now, the game and the novel reveal how the sinister forces vying to control the nation are opposed by a secretive band of hackers and activists known as DedSec. The novel follows one would-be hacker as he witnesses a savage murder and is then drawn ever deeper a conspiracy that threatens the entire city. Authentically steeped in London culture and full crammed with fast-paced action, the novel acts as a direct prequel to the events of Watch Dogs: Legion® 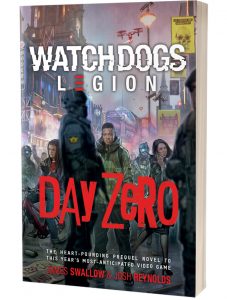 The novel will publish in the US and UK as an ebook (October 13th) and trade paperback (November 3rd), from all good bookstores and online outlets. The authors of this exciting near-future thriller are James Swallow, a New York Times, Sunday Times and Amazon #1 best-seller with his Marc Dane series, as well as bestselling tie-in novels for Star Trek, Warhammer, Doctor Who, and Deus Ex; and Josh Reynolds, noted writer of many all-action novels for the Warhammer range, most recently Knight of the Blazing Sun, as well as his Daidoji Shin novels for Aconyte.

As part of its ambitious mission to set up exciting new content platforms for both wholly owned and topflight third-party properties, Asmodee Entertainment have announced Aconyte’s plans to produce novels set in the worlds of some of Asmodee’s most popular games and more featuring a host of characters from the Marvel comics universe. The imprint’s mission is to go beyond tie-in fiction and novelizations, to produce vibrant stories with richly imagined characters in living, deeply realised settings. The list debuted in early September 2020, with sales and distribution handled by Simon & Schuster.

Asmodee Entertainment is a platform of games publisher and distributor Asmodee. Its mission is to extend Asmodee’s intellectual properties into TV/film, novels and comics, location based-entertainment, and consumer products, working closely with Asmodee Boardgames and Asmodee Digital. Through best-in-class partnerships across the full spectrum of opportunities, Asmodee Entertainment will create truly global intellectual properties and brands.

Asmodee Group is a leading international games publisher and distributor committed to telling amazing stories through great games with over 34 million games sold in more than 50 countries. Through our portfolio of iconic game titles, including Catan, Ticket to Ride, Pandemic, Dobble/Spot it!, Arkham Horror, Splendor, KeyForge, and Star Wars: X-Wing, we create a dynamic transmedia experience for players across a variety of digital and physical platforms. Asmodee also creates inspiring and innovative products in partnership with leading entertainment and technology companies. Asmodee operates in Europe, North America, South America and Asia and is headquartered in Guyancourt, France. Learn more at corporate.asmodee.com.

Ubisoft is a leading creator, publisher and distributor of interactive entertainment and services, with a rich portfolio of world-renowned brands, including Assassin’s Creed, Far Cry, For Honor, Just Dance, Watch Dogs, and Tom Clancy’s video game series including Ghost Recon, Rainbow Six and The Division. The teams throughout Ubisoft’s worldwide network of studios and business offices are committed to delivering original and memorable gaming experiences across all popular platforms, including consoles, mobile phones, tablets and PCs. For the 2019-20 fiscal year, Ubisoft generated net bookings of €1,534 million. To learn more, please visit: www.ubisoftgroup.com.

To find more information or to arrange an interview about Aconyte’s mission, see aconytebooks.com or email our Marketing Manager, Anjuli, anjuli@aconytebooks.com