New from Marvel Untold: The infamous Doctor Doom must face his deadliest enemy, the evil Red Skull, to save his people and himself in this thrilling Marvel Untold novel.⁠

We are so excited to reveal the cover for David Annandale’s newest novel, The Tyrant Skies.

Here is a quick Q&A with author, David Annandale. 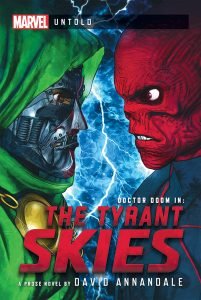 Aconyte: What can we expect from The Tyrant Skies?

David: The Red Skull has created a flying island, Wolkenland. Shielded from all sight, the island arrives over Latveria. Doom not only has to face the invasion of his homeland, but the Skull has something very particular in mind for Doom. To say that Doom’s struggle this time is personal would be to understate things.

Aconyte: How do you feel about wrapping up the Doom trilogy you started in 2020?

David: I feel a mixture of joy and sadness. As I never tire of saying, Doctor Doom is my favourite of all Marvel’s characters, and so completing a trilogy of novels about him is something beyond a dream come true, and a career high point, and I’m ecstatic to see the book come out. But I’m also very sorry to be leaving Doom, Verlak, Orloff and the rest of Latveria behind. I’m really going to miss them.

Aconyte: What were the challenges of writing a villain as odious as the Red Skull?

David: There is certainly the challenge, present with any character who’s been around for over 80 years, to try to do justice to them. At the same time, I’ve written a lot of villains over the years, the Red Skull could well be the most vile. It was almost like being slimed to be inside his head. And I felt a need to be careful, too, because the grandiose scale of the Red Skull’s scheme in the book is the sort of thing that could, with a different kind of villain, make them seem majestic, and the last thing I would want is for the word “majestic” to come within a country mile of the Red Skull.

Aconyte: Are there are specific influences for this story that people can also go read/watch?

David: There are two really huge influences at work here, both of which people can find on Marvel Unlimited. The biggest, which I’ve mentioned before as informing the other Doom books, but which really comes to the fore here, is the story in Astonishing Tales issues 4 and 5, where the Red Skull first attempts to take over Latveria. The other story appears in Amazing Adventures 6, but I would strongly suggest readers not track that one down until after they have read the book, as that would take them into spoiler territory.

Aconyte: Are there any other Marvel anti-heroes you’d like to write?

David: I suppose it depends on how one defines “anti-hero,” and if we’re leaning more toward the heroic or the villainous side. If it’s the former, I would dearly love to take a crack at Ghost Rider. If the latter, I think it would huge fun to tackle a story about the Lizard in a non-Spider-Man context. 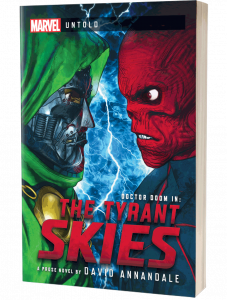 Victor Von Doom has many enemies, but he has a special loathing for the Red Skull. When the Red Skull creates a flying haven for the billionaire elite who share his deplorable values, Doom prepares himself for the worst. When Latveria is beset by a rash of terrorist attacks, his suspicions are confirmed: the Red Skull is coming for Doom’s homeland. Now he must infiltrate the shielded microstate drifting in the skies above Latveria to save his people from annihilation. But finding a way on board the floating city is just the first in a series of trials that will test Doctor Doom to the limits of his beliefs, his strength and his powers.