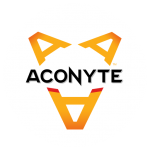 We are the novels division of Asmodee Entertainment,
to deliver on the Asmodee slogan:

Publisher (ie boss) of Aconyte Books. A sci-fi / fantasy lifer, previously known for running Angry Robot,­ Games Workshop’s Black Library, Fighting Fantasy gamebooks, as well as dozens of books and games. Still insists that the best thing he ever worked on was a Sonic the Hedgehog novel. Lives in Nottingham, but often to be found at the top of somewhere breezy in the Peak District with his beloved.

Lottie is a bibliophile who took a wrong turn in the wardrobe and ended up as an editor – luckily it was the best choice she ever made. She’s a geek and fangirl with an addiction to unicorns, ice hockey and ice cream.

Fills in the gaps between words with systems and webstuff. He lives happily detached from reality, in a largely imaginary domestic world of cats, science fiction & fantasy, LEGO, and improvisation with MissImp. Creator of The Improvised Star Wars Show, and occasional Nanowrimo winner.

Addicted to lists and easily excited by spreadsheets and formulas. Ness recently moved to Nottingham to be closer to family as it turns out twins can be quite demanding! Likes escaping into a good book, sorting her MTG cards for the 900th time, and playing games with the husband who is a bad loser and an even worse winner.

Known as the man with the hardest working mustache in publishing, Vince has worked in publishing for over twenty-five years at Simon & Schuster, Black Library and Pike & Powder Books, LLC where he has done everything from making the numbers look good to making the books look good.  He has written several history books and is a life-long gamer.

Anjuli is a super-nerd with a deep and unbreakable love of RPGs and storytelling. Always the Dungeon Master, never the Rogue, she spends her free time playing games, painting miniatures and enjoying gin with friends.

Asmodee Entertainment is based in an amazing building in Nottingham, England. The Star Brewery opened in 1852, producing beer for Shipstones until 1991. Now it contains us (and a range of other businesses). It’s a pretty cool home, featuring four-foot thick walls and more metal stairs than you can imagine.